A place for current or ex-Can Am owners to natter..
Post Reply
5 posts • Page 1 of 1

In January 2020, my friend Dan decided to part with his pink repro SAS CanAm. Having saved up a bit of wonga since purchasing the MT350 from "Yeti" and the E-500 engine from Kevin nr Exeter. I took the decision to purchase this CanAm as I quite fancied another since selling my first one and owing to a bit of a liking for the Rotax brand.

This particular CanAm had originally been owned by another friend - Neil "Bishbash" around 2015, who also owned and sold me my first CanAm. However, this CanAm wasn't road registered and missing a loom. But what made it more desirable was the fact that it had the Belgium aluminium wheels - 21" front, as a pose to 18" steels. As I had owned a CanAm previous and become a bit more familiar with bike restoration and stipping electric 500 engines out of MZ's I decided I'd give it a punt. 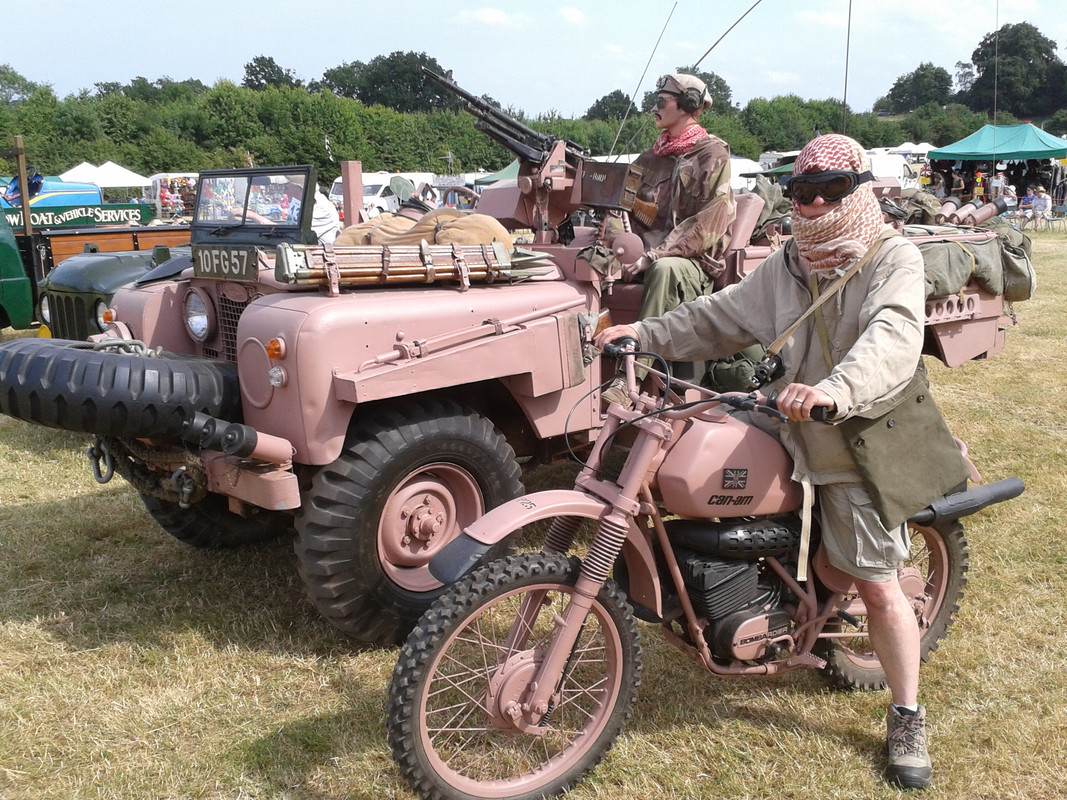 The bike had previously been used by Neil for military vehicle shows and off-roading. Featuring off-road tyres, no lighting or electrics and painted pink to resemble the CanAm of that seen in an SAS photo in Oman. Where a CanAm is lent against an iconic S2 Pink Panther Land Rover. As the bike wasn't road registered, the key points for me were to fit road legal on/off-road tyres, install lighting and electrics and repaint the bike green as the bike was originally RA BAOR (Germany) sourced from its B card, plus pink wasn't really to my taste when parking up in Morrisons.

But I wanted to retain the bikes off-road ability with the intention to green-lane. What with the bike being fitted with the previously mentioned aluminium wheels and 21" front. So to make the bike MOT ready, I ordered a set of Pirelli 50/50 tyres and a loom from Paul Wilkinson. 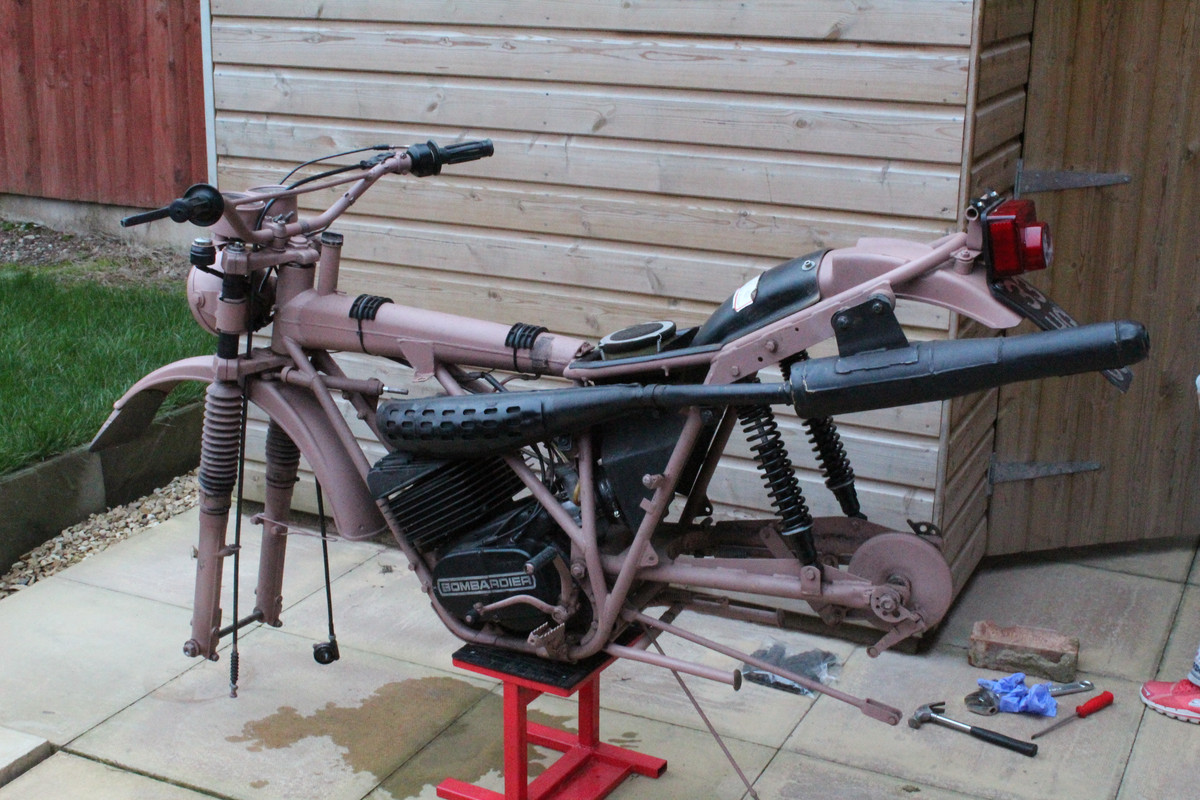 A bit more to the story... Before buying, I knew the bike wasn't running right, symptoms being that it was revving high when idle. Which was suggested as being old petrol. Although I had theories that it could be an air leak. On inspection, I found there to be a crack in the exhaust and weeping from the head. So I sent the exhaust off to be welded and I took the head off to inspect. The head just had residue around the mating face, so a flat blade screwdriver cleaned it off and I re-torqued. The exhaust, however, was damaged during welding (by a friend) so a new exhaust had to be purchased.

Moving on, I purchased new carb parts from Paul, cleaned and rebuilt the carb with help from Chris Brooks and sent the wheels off to have new tyres fitted. 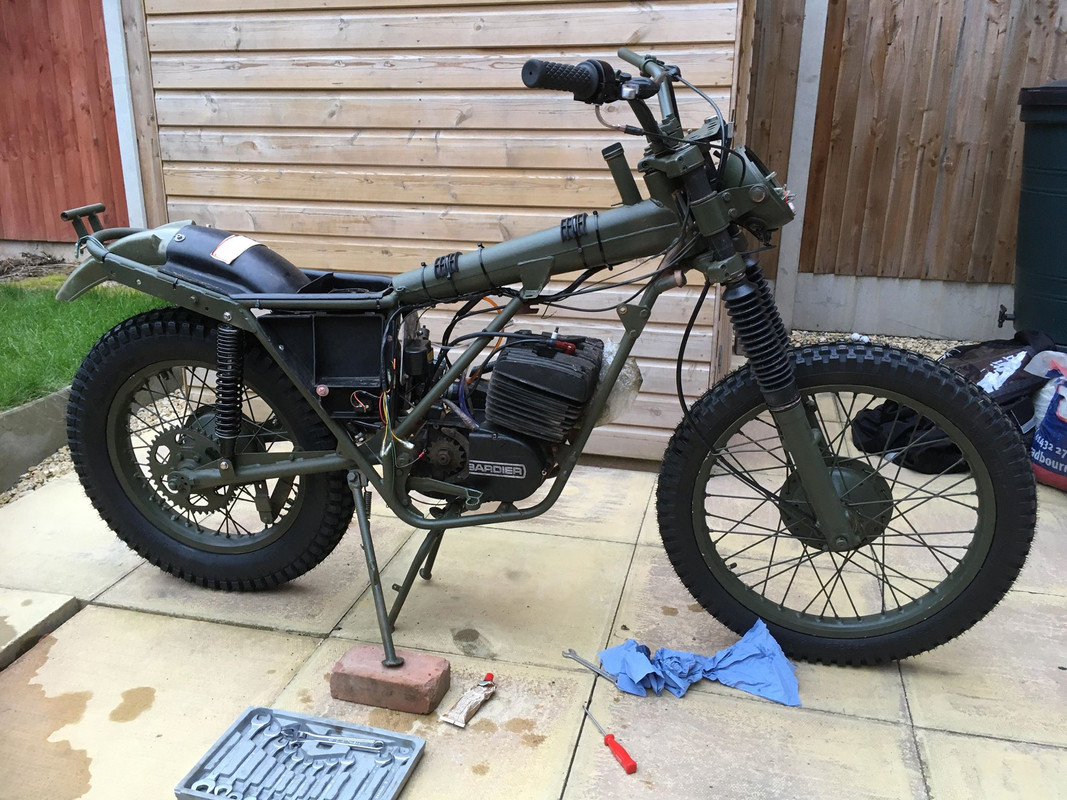 A little while later, I'd resprayed the frame, tank, panels etc and started to bolt everything back together. I had also sent the clocks away to Speedy Cables for new lens. But unfortunately, they were unable to source parts and that came to no avail. I didn't get the carbs right the first time around with the pin height, but after some tuition from Chris Brooks and a biker at work, I got the float height sorted out, so the engine wasn't flooding. I then filled the engine with new Fuchs oil and got it to fire up. 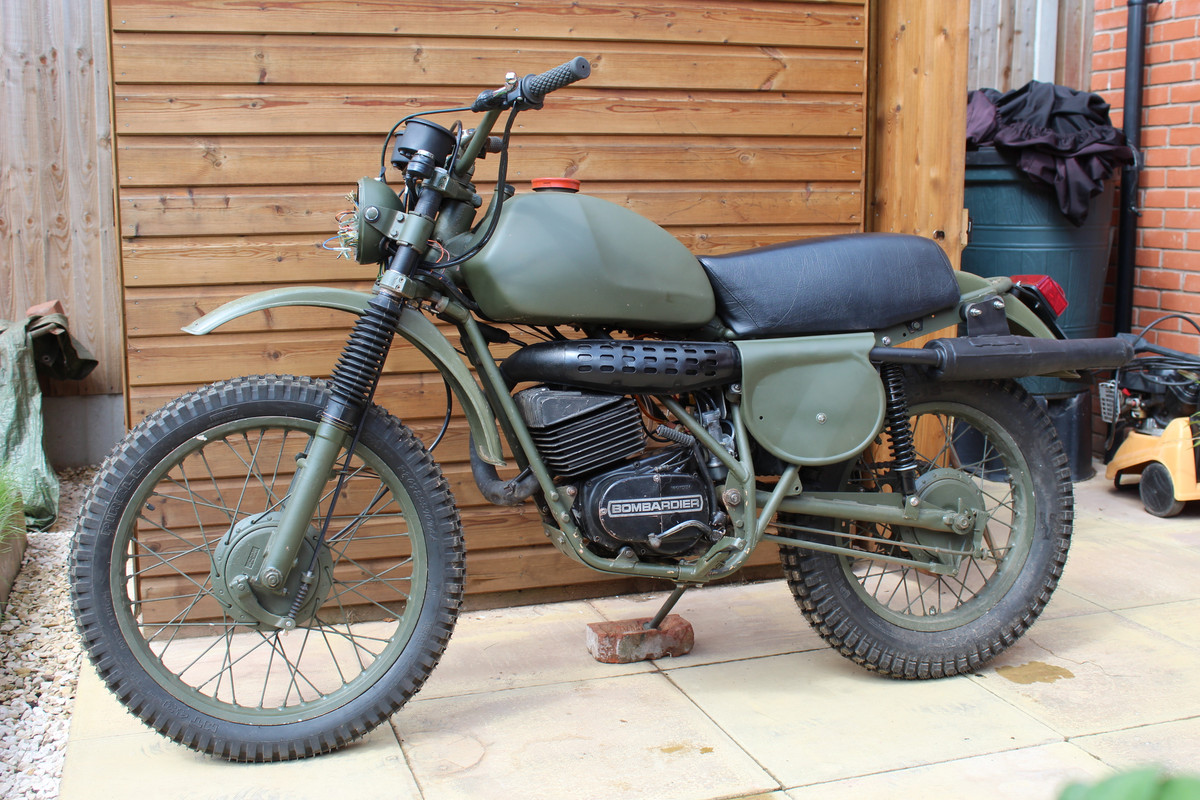 However, after a couple of days, an oil leak appeared on the patio, stemming through the gear lever shaft. So I tried a new O ring but that failed. So, in the end, had no choice but to send the engine away to Richard Nixon of CanAm Clinic for a rebuild. 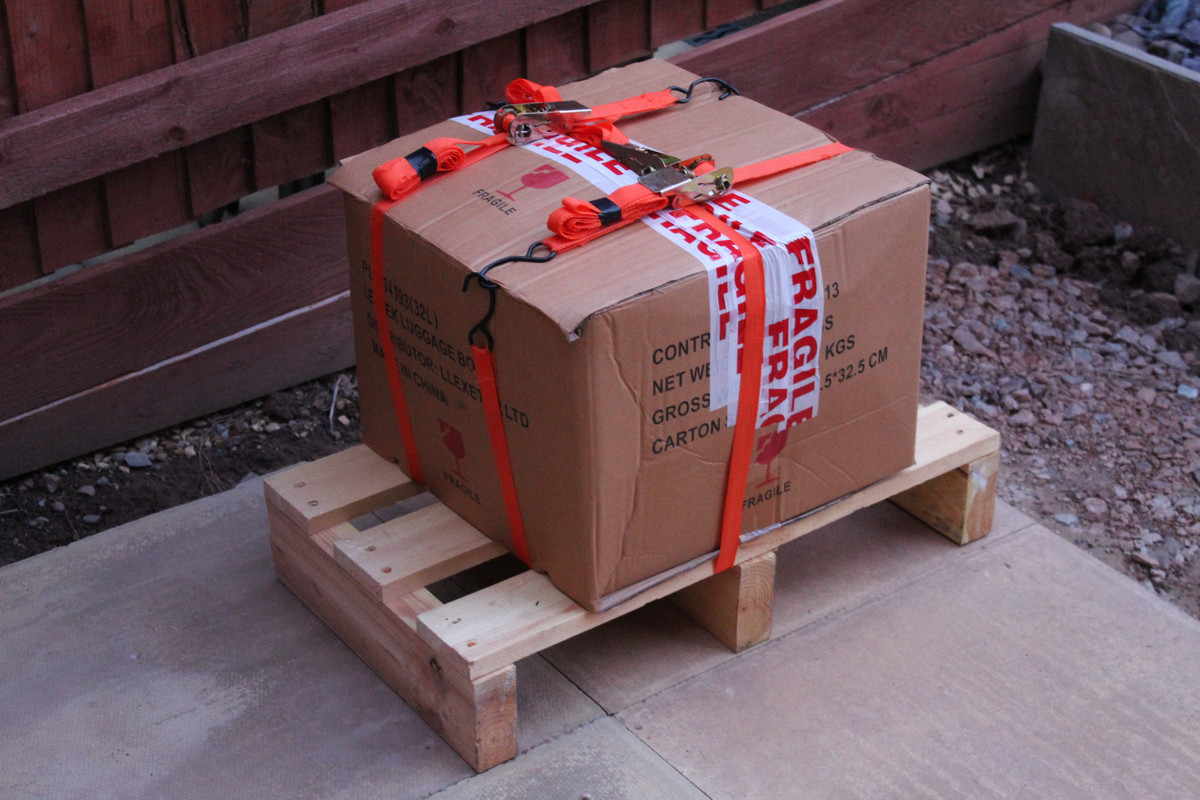 As it transpired, the small end bearing needed replacing as well. So that got done too and all for a good price. A month later, the engine returned, now oil leak-free, air-leak free and with a clean carb, the bike was running mechanically like a charm. The last job now was to get the loom wired up and the bike MOT'd so that it could be registed. 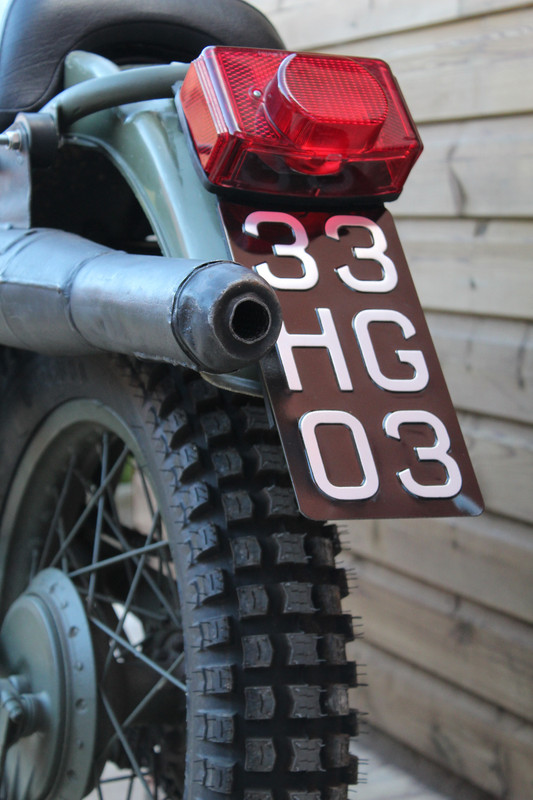 Youâ€™re inspiring me to finish my restoration. Thanks..
1 x
Top

So I took the bike to my local back street garage around October time. One of their lads started working on the loom and got the tail light working but then ran into difficulty and started blowing fuses. The bike got put to one side for a couple of weeks and then the garage remembered to phone me and make me aware of their troubles

As other owners have found and Paul Wilkinson pointed out (electrician by trade) the CanAm wiring diagram is probably the worst example of an electrical drawing. Maybe it was drawn by a French-Canadian working for CanAm at the time who later went to work for Peugeot, Citroen or Renault?

Although the electric components are Lucas

When the garage notified me that they had run into a dead-end, I got in contact with Paul Wilkinson. After an informative telephone conversation, the general gist was to disregard the ignition switch colour coding as they can vary, so fit that last. Orange is live in position 1 and grey is live in position 2 (lights), plus a few other pointers.

But in the meantime, I managed to source a second-hand loom with block connectors for comparison with the 'new' bullet connector loom supplied by Paul. Plus someone on the CanAm Facebook group had come up with a new design wiring diagram! So I'm hoping having equipped them with that information, they'll be able to figure it out.

When I get the block loom back, I plan on doing a write-up of it with photos + the notes from Paul. To help others out in the future, should they run into difficulties (probably a certainty).

Also in the background, I came across PJ1 high-temperature paint. Apparently the best high-temperature paint on the market - heat resistant to 500.C and formulated with silicon allowing it to expand and contract. So shouldn't flake as quickly... re-painting the exhaust on my last Can-Am was a yearly job. So interested to see how it fairs out.

Another useful product that I've come across is Halford degreaser for cleaning anything covered in chain lube, oil, soiled dirt/mud. Carburettor cleaner in a spray can also does a good job at degreasing too.

On a side note, I removed the rubber insulators from the cooling fins to "improve" the engine note

in doing so, I noticed trapped moisture has started to erode the magnesium. So I would suggest other owners take their insulators out and treat any water damaged areas by rubbing down and re-painting. Alternatively, I've seen a picture of a civi CanAm with the insulators cut shorter, so more air between the fins and still some resonance dampening.

Great reading Jack. keep the updates coming, you are almost embarrassing me into getting started on my 3rd canam but with no heating in the garage its gona have to wait, for the moment

Users browsing this forum: No registered users and 6 guests